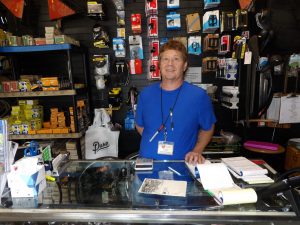 In early 2015, Troy lived in Utah with his wife Sabrina. They were addicted to prescription pain medications. He was on a downward spiral of job loss, homelessness, scraping by, spending their last dollars to stay in a hotel with their three boys. They had put their name on the waiting list in 2014 to be considered for an opening at Open House Ministries. Then six months later the call came.

The family moved into the shelter July 2015 and began rebuilding their lives. Their goal was “to work the programs offered at OHM and keep their eyes on God.” That turned out to be the best plan.

The couple became involved in every opportunity they could. When it came time to getting job coaching, Troy was drawn to the bike shop on campus. Although he had been a supervisor in the past, the bicycle industry was completely new to him. Chaplain Mark had faith in Troy’s ability to take on a lead position and Troy was eager to learn. He began as a mechanic, and was soon promoted to supervisor. Now he works full time as Manager of the Wheel Deals Bicycle shop. Chaplain Mark says, “I saw both a resolute faith and a clear testimony in both Troy and Sabrina. He had mechanical skills, leadership skills and they both had clear evidence of a NEW Life in Jesus.”

Troy and his family moved out of the shelter into their own home over a year ago. Sabrina is working full-time now and you will find Troy managing Wheel Deals Bicycle Shop, mentoring other residents. “The reason I’m still here,” he explains, “is because I believe in what we do for other people. I experienced first-hand how every day the staff deals with situations with integrity. This is a place where you can make a real difference. I believe God has me here for a reason, and I am so thankful for that.”